Animism as a Metaphor for Interaction Design

Joshua McVeigh-Schultz and I presented our paperÂ at SIGCHI 2013 in Paris. It presents ideas and a project on using animism as a metaphor for interaction design, something I’ve been exploring for the last few years.

Go here for a link to a free download of the paper.
END_OF_DOCUMENT_TOKEN_TO_BE_REPLACED

The NETLab Toolkit is a system for integrating tangible interaction and media. Designed for project sketching and production, the toolkit enables novices and experts to integrate hardware, media and interactive behaviors for products, installations, and research

This free collection of software makes it easy integrate all kinds of media with microcontrollers like the Arduino. Using a simple drag-and-drop interface, you can create interactive projects that combine sensors, video, text, graphics, sound, lighting, motors and more. These projects can be created quickly, without programming, using the smart widgets included with the Toolkit.

I initiated the project in 2004, and have continued developing it since. It is used all over the world by schools, individuals, and agencies.

Recently a few of my students from the Media Design Program at Art Center and I created an interactive installation for the 10th anniversary of the Architecture+Design Museum. The A+D is a growing institution in the Los Angeles area, and they were having a party for their board and major donors.
END_OF_DOCUMENT_TOKEN_TO_BE_REPLACED

The School Performance Dashboard web project was developed for USC’s Center on Educational Governance provides an easy way for educators and others to explore a range of performance metrics for charter schools in California. Each charter school is rated on 12 indicators assessing financial resources and investment; school quality; student performance; and academic productivity. Users can evaluate individual schools; compare the performance of multiple schools; review the performance of a single school across several years; or download the entire data set.

The challenge with this project was to make access to thousands of database entries easy to use for school administrators, researchers, parents, and the press. By creating a clean and clear visual and interactive system, users can explore the data in a very direct and productive way.

Working with Liz Burrill and Jamie Cavanaugh, I developed the interaction design and functional capabilities, and then built out the database and software. The system allows users to do incremental searches based on county and/or school name, showing immediate results as the user types. When a school is selected, it animates into the Schools of Interest List, building the user’s personal list of schools to analyze. The list can then be customized by narrowing the set of indicators to focus on, and then printed or downloaded as an Excel file. Alternatively, the user can select any single school, and analyze it over several years to see how performance has changed. 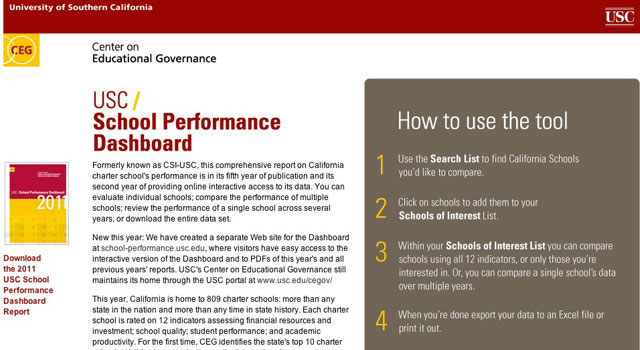 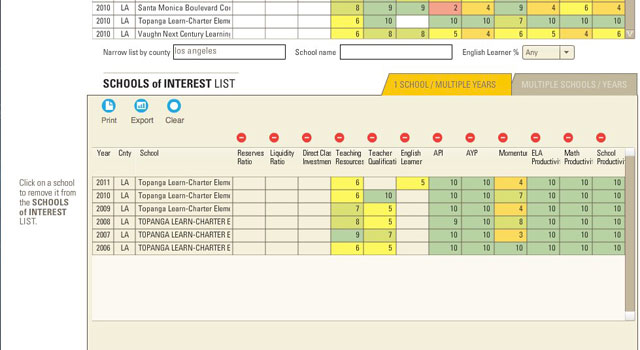 I’m very interested in how tangible objects can be used in interesting ways to interact with information on screens. This video collects together a series of experiments on the use of a range of object prototypes. In making these, I imagined a screen in front of me (in some cases a standard size screen, in other cases a wall sized screen), and manipulated the various objects as if I was controlling and interacting with content on the screen. It was more an experiment in the affordance of the objects in relation to screens than thinking of specific applications.

This project was aided by the help of my graduate students Jonathan Jarvis, and Parker Kuncl.

This project created two touch screen learning stations installed in the renovated Huntington House on the grounds of theÂ Huntington Library in San Marino, CA. Working with an education specialist at the Huntington, we developed projects around exhibits on Silver and Porcelain, targeted at 8-12 year-olds. These touch projects focused on the history and craft of the objects displayed, and involved children in interactive activities such as selecting the kiln temperature to fire the porcelain, or putting their stamp on a silver vase.

In collaboration with Liz Burrill (visual design), and Jamie Cavanaugh (technical production & animation), I developed the interaction design and wrote the software.

TheÂ Acura Oracle project was initiated by MDP alumniÂ Nikolai Cornell atÂ George P. Johnson for theÂ Acura stand at theÂ international auto shows (including Detroit, Chicago, New York, and LA) for the 2006/2007 and 2007/2008 exhibitions. It’s a 4 foot round multitouch table that enables a social experience for a group of people.

I participated as a consultant in the initial creative brainstorming and technical definition. I brought in Moto Development to create the multi-touch technology and optics, coordinated Moto with the creative team, advised on interaction design issues, and developed test projects and tools exploring different interaction possibilities. In the summer of 2007 GPJ loaned an Oracle for use in my class, and student Jonathan Jarvis made demos that became the design basis for the second version that was at the 2008 auto shows.

Video after the break

END_OF_DOCUMENT_TOKEN_TO_BE_REPLACED

I continue working on a series of design sketches that explore the ideas expressed in my essay, Productive Interaction. The main idea in this essay is that Interaction Designers should create interactive systems that allow users to create their own meaning space rather than designing scripted experiences. These experimental sketches are sometimes very rough, and other times more refined. They help me as I pursue new ways of interacting, driven by my writing as well as feeding new writing in an ongoing cycle of thinking and making.

Some of these ideas ended up in more complete projects, including the Acura Oracles and A+D Museum projects. For the Oracles, the idea of generating bits of information from a database (as in the Words project) plays out as the user moves their finger across the touch table. In the A+D project, the ideas of simultaneity, juxtaposition, and randomness play out as the slideshows display. We also creating a dynamically updating system, inserting live images from the event.

Detailed explanations and videos after the break. END_OF_DOCUMENT_TOKEN_TO_BE_REPLACED

An installation for Infiniti at the International Auto Shows, theÂ Infiniti Interactive Mirror is a 3 screen interface that uses mirrored glass and rear projection to create a seamless large screen touch interface. George P. Johnson created the project with Nikolai Cornell as creative directorÂ (MDP alum, based on his thesis project). Nikolai worked with The Designory, MindFlood, and my company Commotion.

On this project, I provided consulting on interaction design and approaches for the project, and designed and built the sensor system thatÂ detects a person’s hand position in front of a flat surface without any sensors on the sides of the display or behind the user.

Read an article on how the project was produced (rescued with the wayback machine – was originally published online at designinteract.com, but communication arts killed it).

Corporate Delicti was a group exhibition atÂ NucleusÂ Gallery around the topic ofÂ disillusionmentÂ with corporate life. Collaborating with student Colin Owen, we built a system of interactive objects from an office – a copier, file cabinet, and fax machine. Painted gray, each object was made interactive by removing the guts and putting sensors and speakers inside.

Video of project after the break

END_OF_DOCUMENT_TOKEN_TO_BE_REPLACED

I consulted for Paul Allen’s Interval Research Corp. in 1997 and 1998, working for early Apple innovatorÂ Joy Mountford, in herÂ group focused on inventing new consumer electronics devices. In particular, we were interested in creating systems for casual music making by non-musicians. As part of this, we designed and built several working prototypes, including the MusicBox project that is written up in Bill Moggridge’s book Designing Interactions. We also worked on a system that linked children’s books to the Web via simple color spots on the printed page. I received two patents (6,164,541 â€“ Methods and systems for providing human/computer interfaces,Â 6,411,994 â€“ Interface system for providing content using context hotspots) for my work at Interval.

As part of my work leading the group under Joy, I worked with a range of musicians and designers, interfaced with product design companies IDEO, Astro Studios, and engineering company Moto. I also worked with Neal Bhadkamkar and others on business planning, creating detailed Bill of Materials for proposed products, and researching potential commercialization options.

It was at Interval that I became convinced that tangible interaction was the key to future forms of innovation.

Launch Magazine was one of the first ever interactive publications, first released in 1994. My company was hired by Launch (later Yahoo! Music) to design and develop the magazine, as well as a production pathway so they could release a magazine every month. The magazine featured new music, interviews of bands, interactive advertising sold by its position in the “real estate” of the screens.

For the U2 ZooTV tour in 1993, I and my MusicWorks team at Philips Media (Brett Spivey, Randy Picolet,Â Mike Diehr)Â created two interactive projects for the band to use onstage. It’s fun to think about what it was like to make interactive media back then. Keep in mind, this was the year NCSA released the first real web browser called Mosaic, before Photoshop had layers, and when a 650 meg (not gig!)Â SCSI hard drive was $2500 and the size of a breadbox.

This experiment allowed the band members to interact with the big video screens as they stood on stage. In the first project, Welcome to ZooTV, Bono selected a region, then the city, and then one of four versions of himself to welcome the audience to the show. The second project was BeatBox, and was run by Edge. He picked a song, and then played around with the beat by changing tempo and selecting between 3 different sound sets (including a zoo version with animal sounds for the kick drum, snare etc.).

END_OF_DOCUMENT_TOKEN_TO_BE_REPLACED

In high school on the westside of Los Angeles around 1973, I built a recording studio in my parents garage. It was outfitted with a Dokorder 4 track machine and a Tascam 12×4 mixing console. Initially I was just recording my friends (e.g. The Big River Band), but then started getting other paying gigs. These ranged from a 14 piece orchestra recording a film soundtrack, progressive jazz (including brothers Alex and Nels Cline), and some of the earliest LA punk bands.

Producer Chris Ashford came to me through a friend who worked at Peaches Records in Hollywood, and we started recording several bands for his record label, What? Records. The most famous of these was the Germs, headed by Paul Beahm, AKA Darby Crash. But we recorded other bands too, including the Dils, Controllers, KAOS, etc. (more info on the early punk scene in this interview with Chris) A bit later, we recordedÂ Gabriel Morgan with Michael Penn producing and playing on his first vinyl – this was at my friend Bob Schreiner’s Westworld Recorders in Van Nuys.

Besides working with Chris, I did all sorts of sound gigs, includingÂ mixing live concerts (Ricky Lee Jones â€“ Santa Monica College, Arco Jazz series â€“ LA Bonaventure Hotel), and being a sound technician for events (Ray Charles at Dorothy Chandler, Bette Middler â€“ The Rose premier). I also did some remote recording for my friend Jim Demeter and his band The Heaters (who completely blew the Talking Heads away at the Whiskey one night). And one time, high school friend Wayne Golden brought Andy Gibb to my studio to record an early music video.